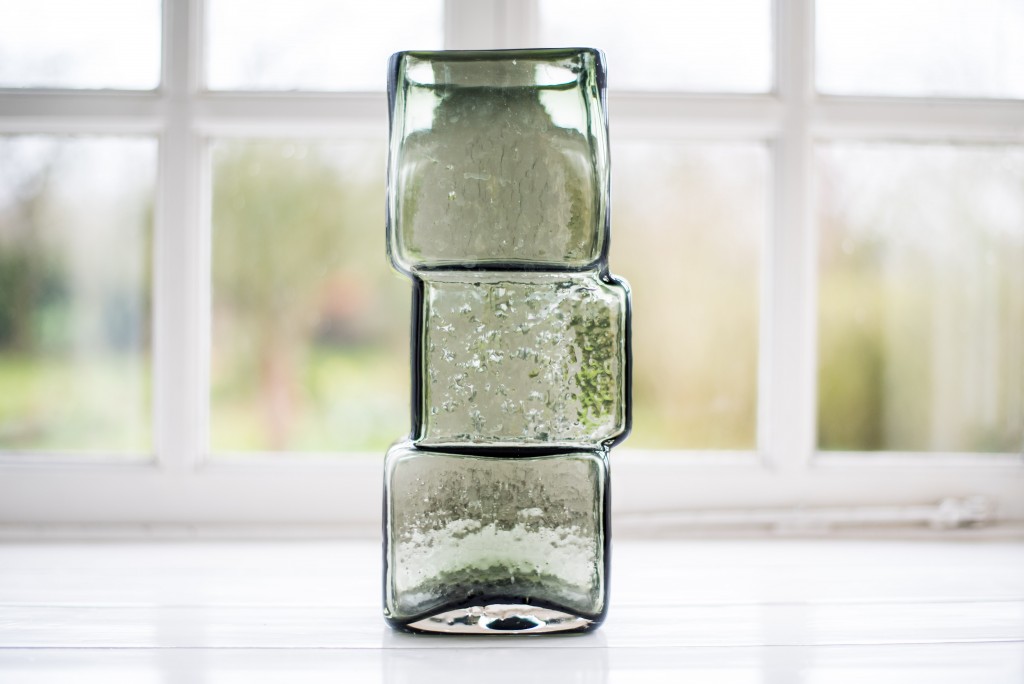 James Powell and Sons, also known as Whitefriars Glass, was one of the most important manufacturers of British art glass. Founded in the 17th century, Whitefriars made its mark on modern design after the Second World War. In particular, the textured vases designed by Geoffrey Baxter. From 1967, Baxter designed some of the most recognisable British art glass. for example, the Drunken Bricklayer vases, Television vases and Banjo Vases. Baxter’s work is highly collectable. Rarer pieces – such as Whitefriars Drunken Bricklayer vases – can fetch many thousands. Read on to learn more about Geoffrey Baxter and Whitefriars Glass.

Whitefriars Glass was the Wedgwood of the British glass industry, a firm whose work was synonymous with the highest standards of design and creativity, and whose glass was sold by leading department stores throughout Britain, including Heal’s, John Lewis and Fortnum & Mason.

Geoffrey Baxter joined Whitefriars as an art student in 1954. Baxter introduced his range of textured vases in 1967. He used found objects including bark and nails to create moulds for textured pieces. From 1969, textured pieces introduced colours such as Tangerine, Meadow Green, Aubergine, Pewter, Indigo, Cinnamon, Ruby and Kingfisher blue. In this case, coloured glass was encased in clear glass. Baxter remained with Whitefriars Glass until production ceased in 1980.

Baxter’s visionary design ensured his textured pieces attracted international and domestic clientele. While considered a pillar of British industry in 1951, cheaper Scandinavian imports threatened Whitefriars’ prosperity. However, Baxter’s work helped turn the company around, for a time. Unhappily, Britain’s economic decline in the 1970s proved too much for the business. The factory was destroyed in the mid-80s. Nevertheless, Baxter’s contribution to British art glass is undiminished. Indeed, prices reflect his prominence, with rarer examples attracting thousands.

Innovation in the Face of Competition

Key to Baxter’s success was the switch to soda glass. Rather than sticking with full-lead crystal, Whitefriars, under Baxter’s eye, moved to soda glass. This material was both cheaper and more flexible. As a result, these pieces were attainable by ordinary people, a fact important to Baxter: ‘It’s all very well to make a masterpiece, but what’s the point if only the elite can afford to buy it?’.

Considered revolutionary at the time, pieces such as Whitefriars Drunken Bricklayer vases were new to British glass. Using deep relief-moulded vases and innovative materials such as bark, tin tacks and copper wire, Baxter produced work utterly unique to British art glass. However, the combination of the high cost of handmade production and the 1970s energy crisis overwhelmed Whitefriars leading to the firm’s closure in the mid 80s.

When investing in antique furniture or art follow simple principles. First, buy what you love. Develop your tastes by visiting art galleries and exhibitions. Then, you will get a better feel for quality pieces. Second, seek out representative works, the rarer the better. Again, your knowledge gained through research and enjoyment of an artist can help you recognise important pieces when you see them. Finally, be confident in the authenticity of a piece before purchasing. This is where working with a professional art valuer can help. In the case of Whitefriars Drunken Bricklayer vases, there are many fakes out there. Choosing between real and fake Whitefriars glass can be tricky. So, finding a trusted seller can ensure a better investment.

Looking for your own Whitefriars vase? MRS FOX can help. Our art gallery in Cambridge sources hard-to-find 20th-century art glass. Moreover, our Cambridge furniture shop sources and sells iconic modern furniture. We love working with collectors to enlarge their holdings. We relish the challenge of sourcing rare pieces! So, browse our shop online, or contact us to learn more.