You are here: Home / Blog / Our Lynn Chadwick Find Steals the Show 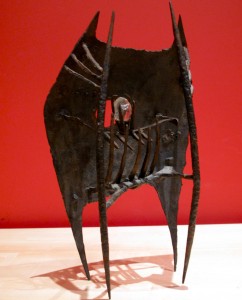 An unassuming sculpture subjected to years of natural wear and tear that had stood forgotten on a mantelpiece for over 50 years has been identified by Fine Art Valuation Ltd and sold at Sothebys in London.

The sculpture by Lynn Chadwick, R.A (1914 – 2003) entitled ‘Maquette I Inner Eye’ was the first in a series of 5 produced by Chadwick in 1952 prior to his monumental versions, one of which is in the Museum of Modern Art in New York. The other 4 in the series are located in collections worldwide including the Tate in London but this first one was only known through its exhibition at Heffers in Cambridge where it was sold on the 5th May 1952; and from a drawing in the collection of the Chadwick family.

Its history thereafter had been a mystery.

Originally it had been bought by a local academic who had fallen in love with it as he passed the Heffers Gallery on his way to work. His diary entry for the day he purchased it was: ‘I mortgage the future out of love for it…to find it for sale like a girl unmarried. To play and reflect in the flirtation and then mine to live with forever’.

When he died, the piece along with its receipt for 12 guineas and his diary, was inherited by his family. “The wonderful thing”, his sister commented to us “was that I remember playing with it as a child, assuming it was some form of toy. I used to spin the eye and marvel at the passage of light through the glass. From the day it was inherited, younger children in the family have been berated for constantly knocking it off the mantlepiece!”.

She was genuinely shocked by the result of our research and subsequent valuation, although not surprised that her brother had made such a brilliant investment.

From our point of view it was one of those opportunities that rarely comes along. A client who was fond of the piece but had no idea as to its value. To discover one of the most significant pieces of modern British sculpture to have emerged from obscurity in recent years has been a real privilege.

To all our surprise the sculpture fetched nearly double its estimate on Thursday 11th July at Sotheby’s Modern and Post War British Art sale, when it sold for £380,000. It was one of the best selling lots (over estimate) in the sale.