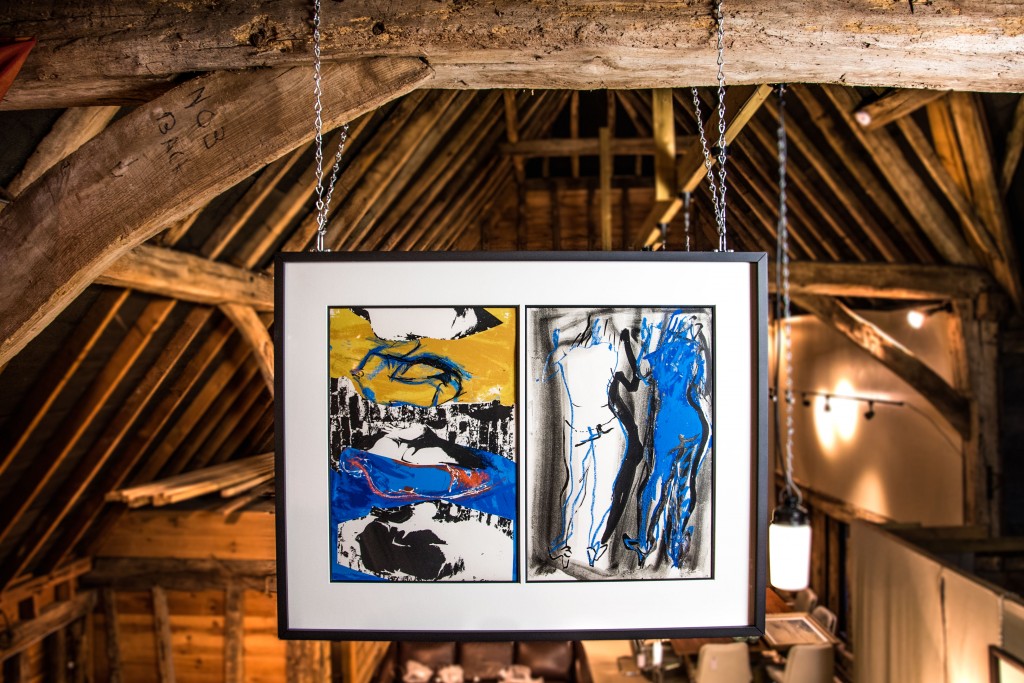 John Egerton Christmas Piper (1903-1992) was an English artist with a long and varied career. His early work in the 1930s reflected interwar Modernism. However, he found what some consider his most authentic expression as an official war artist during World War II. In particular, his depictions of ruined and bombed churches propelled him into the British consciousness. Recent exhibitions, such as at Tate Liverpool, demonstrate Piper’s legacy and place in British art. As an artist, John Piper offers collectors a wide field of possibilities from his early abstract work, to more representational landscapes and architectural paintings.

Born in Epsom, John Piper showed an interest in art from an early age. Spending many days exploring the local countryside, he drew and painted churches and monuments throughout his boyhood. However, his ambitions to pursue art were confounded by his father, Charles Piper, a solicitor. Piper’s father insisted he pursue the law and join the family firm. While Piper succumbed to his wishes for a time, ultimately he scorned the family business and followed his passion. Trained at both the Richmond School of Art and the Royal College of Art, John Piper’s art came to prominence during the Second World War.

In the early 1930s, Piper exhibited with the London Group. He acted as secretary for the Seven and Five Society which included Henry Moore, Ivon Hitchens, Ben Nicholson and Barbara Hepworth. He also travelled to Paris where he befriended Alexander Calder. Inspired by these avant-garde artists, Piper’s work from this period reflected the trend for abstraction. However, by the late 1930s, he returned to a more naturalistic style.

And it was his more representational work during WWII that assured his place in British art history. Between 1940 and 1944, John Piper worked as an official war artist for the War Artists’ Advisory Committee. He focussed on depicting bombed churches as soon as possible after destruction. A well-known example is St Mary-le-Port, Bristol. Based on drawings created within a day of the Bristol bombing raids in November 1940 this evocative oil painting offers hope in times of great struggle.

Many of the best practices which apply to investing in antique furniture also apply when investing in art. Firstly, buy what you love. In addition, develop your tastes by visiting art galleries and exhibitions. By exploring the kinds of pieces you enjoy you will get a better feel for quality pieces. Secondly, seek out representative works, the rarer the better. Again, knowledge gained through your own research and enjoyment of an artist can help you recognise important pieces when you see them. Finally, be confident in the authenticity of the piece before purchasing. This is where working with a professional art valuer can keep you on the right path.

John Piper’s art offers attractive options for collectors. Firstly, Piper was incredibly versatile, including painting, stained glass, printmaking and theatre sets. His work is colourful and eye-catching, making a great talking-point on a wall. Secondly, the catalogue raisonne of his works was published by Orde Levinson. This provides the collector with plenty of information to identify Piper’s works as well as resources to build a thematic collection. Next, as a prolific artist, his work is quite accessible as there is plenty about. Though interest in his work peaked 5-10 years ago, prices have stabilised. Thus, Piper’s work can fit most budgets with entry-level prints starting around £300. Finally, John Piper’s art makes a sound investment. On the one hand, he is deceased so oeuvre is complete. On the other hand, his work is widely represented in academic discussions and exhibitions. As significant figure in 20th C British art, Piper is highly collectible.

Interested in collecting John Piper art? Perhaps you are a more seasoned collector seeking difficult-to-find pieces. Or newer to art investment and wish to work with a trusted professional. MRS FOX can help. Our art gallery in Cambridge offers a number of Piper’s pieces, as well as works from other 20th century artists. Moreover, our Cambridge furniture shop sources and sells iconic, design-led modern furniture. We love working with collectors to enhance their holdings and we enjoy the challenge of sourcing hard-to-find pieces. So, browse our shop online, or contact us to learn more.